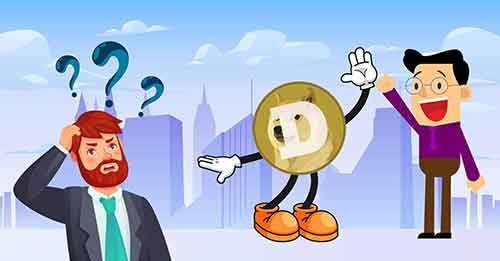 Is Dogecoin a Joke? Understand the Facts About Dogecoin

Dogecoin is digital money or cryptocurrency like bitcoin that makes peer-to-peer transactions possible across the decentralized network. Bitcoin is proof of concept original blockchain that has transformed the way money can work. Dogecoin- what started off probably as a joke is now surging at its all-time high market value. It was born in 2012 as a mere experiment to let people try out the new technology. But over the past few years, it has soared and gained massive popularity amongst investors.

What Drives People to Invest Money in a Dogecoin?

In the GameStop case, WallStreetBets forum users decided to drive up the stocks after being the pandemic hit that brought down the stock value. But amateur investors online turned their fate by buying the falling stocks in masses. And GameStop exceeded $350 and beyond the peak historically, whereas a few weeks back, it was worth only $20. Internet users changed the course set by lofty investors, and Wall Street and its stock is referred to as the “meme stock.” Similarly, Dogecoin has been lifted by its internet popularity, and people sticking by it to see it go beyond $1.

But goes beyond the initial hike. The online store accepts dogecoin, and its investment is becoming a part of diversified portfolios of cryptocurrency. Doge enjoys a market cap of USD 6.39bn and is ahead in the game from Aave, Uniswap, Monero, and EOS. It has been available on the Ethereum network since January 26, 2021. Transferring value between blockchains, Re Project has joined OpenDAO to encourage on-chain real-world assets to launch renDOGE. The users will be able to convert DOGE to renDOGE, to stablecoin DOGEO on OpenDAO’s app. The stablecoin will help as collateral for DeFi decentralized finance products, including loans. It has also become popular on cryptocurrency exchanges and now available to more people. Exchanges like Huobi Futures, FTX, and WazirX have added DOGE on January 13. Dogecoin trading is available on crypto exchanges like Binance, Bitfinex, and OKEx.

How a meme became a real cryptocurrency?

Billy Markus, IBM software engineer obsessed with video games, created a project called Bells. Bells were used in Nintendo as cryptocurrency in Animal Crossing. He used Bitcoins open code and playfully created his own cryptocurrency. Bells and Bitcoin were different in the sense that if one mined Bitcoin consistently, one would receive great rewards, which was not the case with Bells. One could win a single or 500 Bells, as Bells was meant to be, as the game was about the animals going fishing.

He read Palmer’s note about going serious about Dogecoin. Markus managed to get code from Bitcoin and created 100 billion Dogecoins. He changed the font to comic sans and used the word dig instead of mine, to be compatible with the dog icon. They had taken it as a joke, which they assumed would die off. Instead, it became popular after they released it. Reddit propelled the rise of Dogecoin. It became a Reddit Tipping bot that took it to the moon. If a user posted any remarks like hey dogebot, he got tipped with5 Dogecoins. And dogecoin began to gain momentum as people sent it back and forth. Almost every Reddit user had Dogecoin.

Why is it no longer a joke?

Palmer had inspired the idea of Dogecoin “for sillies” and had not even thought of it to be traded for real money. It all began when the Jamaican team, who had qualified for the Winter Olympics in a decade but did not have adequate funds, Palmer with his Dogecoin team decided to help. They put in a dogecoin address in the subreddit, asking for donations, and managed to collect $25,000 in a matter of hours. They aided in building water wells to help Kenyans as they wanted to create something as a force of good. But as it gained popularity and community grew, people were trading it for real money and serious money. That’s when Markus opted out. January end, Dogecoin value rose to 262% equating to US$0.0463, as per BusinessInsider. SatoshiStreetBets, a forum on Reddit, aimed to take Dogecoin to the moon till it achieves $1 worth.

Does Dogecoin grow faster than Bitcoin?

Since the start of 2021, the value of DOGE is rising, so it is the right time to invest. According to the Dogecoin prediction, the value will remain on the surge and soon even cross Litecoin. As per Elon Musk, as cited in Coindesk, Dogecoin has gone beyond Bitcoin, which has a market value of $700 billion, to become the most prominent cryptocurrency on Twitter. Dogecoin has gained 45% this year and is six percent more than Bitcoin. Though DOGE fared well in 2020 with a 13% rise, Bitcoin rose to 300% and Ether to 460 %, even though Dogecoin is less common than the other two cryptocurrencies. But this year It went up in the stock market by 2.5%. Dogecoin is assumed to equal $1 in value.

Dogecoin that started off probably as a joke, is now surging at its all-time high market value, ready to equal the value of 1USD, with Reddit supporters. It is ready to enter the DeFi world, besides exchanges like Huobi Futures, FTX, and WazirX have accepted it, and crypto exchanges like Binance, Bitfinex, and OKEx.