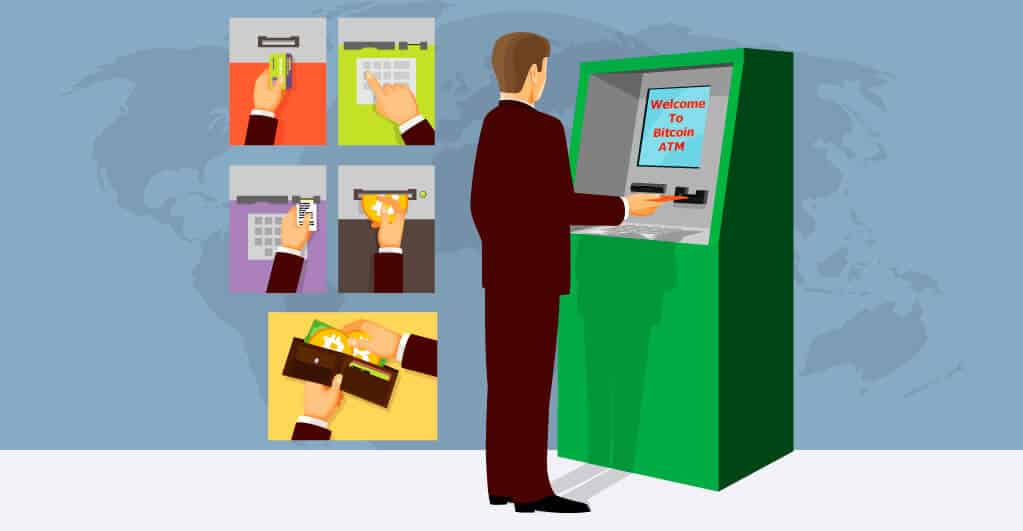 How To Use A Bitcoin ATM?

Who says that the ATM is only for withdrawing fiat currency? With the rapid advancement of Blockchain technology, it is now possible to cash out Bitcoins at the all-new Bitcoin ATMs. A Bitcoin ATM allows users to buy and sell Bitcoin in exchange for cash. Also known as BTMs, a Bitcoin ATM dispenses Bitcoins in return for money from the user. Some also allow users to withdraw cash in exchange for Bitcoin.

Every transaction takes place anonymously, although some ATMs impose KYC (Know Your Customer) regulations on users. If you seek to gain more information about Bitcoin ATMs, then read on to know more about how the machine works. If you are a beginner, then go through the Bitcoin buy guide right now to understand the convenient way of buying and selling digital currency at the BTMs around the world.

What is a Bitcoin ATM

How Does a Bitcoin ATM Work?

How to Use a Bitcoin ATM?

What is a Bitcoin ATM: A Brief Background

The Bitcoin ATM (BTM) is similar to an ordinary ATM, and the only difference is that it dispenses Bitcoin in exchange for cash. It is a physical exchange machine that enables people to engage in selling and buying Bitcoin with fiat currency cash in return for a transaction fee. The first Bitcoin ATM of the world commenced its operation on 29th October 2013, at the outlet of Wave Coffee Shop in Vancouver. The Bitcoin ATM machine consists of a cash dispenser and a scanner in integration with a computer system for the management of transactions.

How Does a Bitcoin ATM Work?

The Bitcoin ATM serves as a kiosk that permits the user to buy and sell Bitcoin with the help of a debit or credit card. Bitcoin ATMs are safe to use and pretty convenient for getting access to Bitcoin funds. Read on to find out more about the way of using them.

How to Use a Bitcoin ATM?

If you are wondering how to use a Bitcoin ATM to sell BTC, then you should know that the way is different for different machines. The process of selling BTC at a Bitcoin ATM varies. Every machine comes with detailed instructions for selling Bitcoin. However, the instructions are simple and quick. Follow the instructions displayed on the machine’s window and sell your Bitcoin stash from your paper wallet to receive cash.

If you own a Bitcoin wallet and want to withdraw them, then drop in at the nearest Bitcoin ATMs for executing the transaction. Keep your wallet ready and read the guide before proceeding to buy and sell Bitcoin at the BTM securely and in compliance with anti-money laundering laws. Make sure it is secured against cyber attacks and frauds so that you do not fall prey to a financial scam. User experience reviews reveal that making a sale or purchase of Bitcoin through the wallet address app in the mobile device at the Bitcoin ATMs is easy. This blog post on buying and selling Bitcoin using Bitcoin ATMs at the charge of requisite fees will certainly help you in conducting the two-way transaction.

1. How do I use a Bitcoin ATM with a debit card?

Follow the steps below to execute Bitcoin purchase transactions at the BTM with a debit card linked with your bank account and wallet:

2. Do Bitcoin ATMs require an ID?

Generally, Bitcoin ATMs do not require the user to disclose their identities for buying and selling Bitcoin in exchange for cash. However, the rule of sale and purchase of Bitcoins varies for different types of legislation of the Bitcoin buying process at BTMs around the world. These machines also do not ask for fingerprint verification code, KYC purposes authentication, or facial identification from the people for the execution of cryptocurrency transactions in exchange for cash bills.

3. What is the withdrawal limit at Bitcoin ATMs?

The limit depends on the current cryptocurrency market conditions and location of the ATM machine. Generally, it is $9500 per day, but it can be more or less on the basis of economic trends and national laws.

4. How much do Bitcoin ATMs charge per transaction?

According to Coin ATM radar’s reports, the average fees of buying Bitcoins is around 8.93%.

Now that you know how to use a Bitcoin ATM, would you like to know more about free bitcoin mining without investment?